Causal Impact Analysis of a Public Health Emergency on PM 2.5 Air in LA during COVID-19

With the recent COVID-19 pandemic, the implementation of quarantine and social distancing by various governments created a ripple of effects that affect cities all around the world. The key driver behind this was the halting of economic activity which brought about a big crunch in the global economy. In the early phase of the COVID-19 pandemic, the media reported that the carbon emissions in China was reduced drastically in mid Feb 2020. This gave me an idea as I wanted to try out some time series analysis on air quality in certain cities with the implementation of a city-wide quarantine measure.

In this article, I will be assessing the air quality of Los Angeles and the impact of the measures taken as part of the public health emergency declared in LA County with relation to COVID-19. The article will also dive into the R code that was used in the analysis with the bsts and CausalImpact packages. The following points frame my analysis:

The data for this was taken from The World Air Quality Project. The particular data measurement point is at North Main Street, which is pretty central within Los Angeles.

The World Air Quality Project works with the following sources:

As shown in the following screenshot, you get to pick the different air quality types. I chose PM2.5 primarily because the values were nominally higher compared to the others, which allows for us to capture a reduction in air quality. The heatmap below shows the daily observations of the data with “cool” colours (like blue or green) representing lower values while hot colours (like yellow or red) representing high values. In addition, we also observe greyed out boxes which represent missing data. 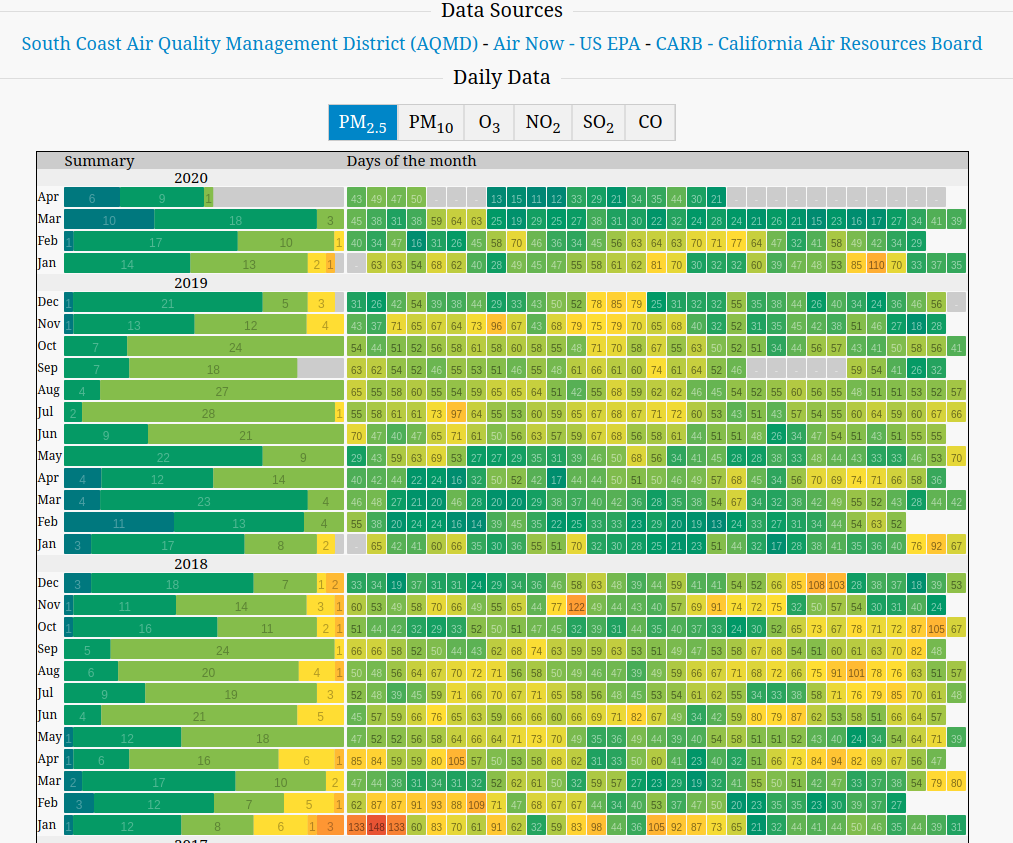 At the point of this analysis, the data I downloaded was from Jan 2014 to 19th April 2020. A simple plot reveals a glaring outlier in Jan 2016 is extremely high of 800 in value which is unlikely. In addition to that, there is also a missing chunk of data leading up to the outlier. 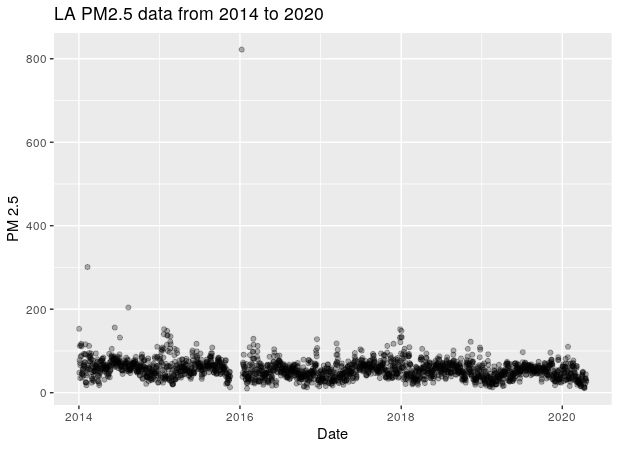 Corroborating that with the heatmap chart, we observe that:

Based on that, it seems that perhaps the measurement instrument might have had a prolonged failure/outage which resulted in 2 months worth of missing data. Any attempts for data imputation is highly questionable as the extended period of missing data makes it hard to determine the basis for imputation.

For the purpose of the analysis, I decided to trim down the data to mid Jan 2016. At the same time, I will be aggregating the data on a weekly basis which is an intentional choice that allows me not to perform any unnecessary imputation of the missing data.

Based on my research of Los Angeles news search, a public health emergency was declared in LA County over the coronavirus on the Wednesday March 4th 2020.

Taking that into account, the aggregation by calendar week basis produced a plot which shows a stable time series withe occasional fluctations. 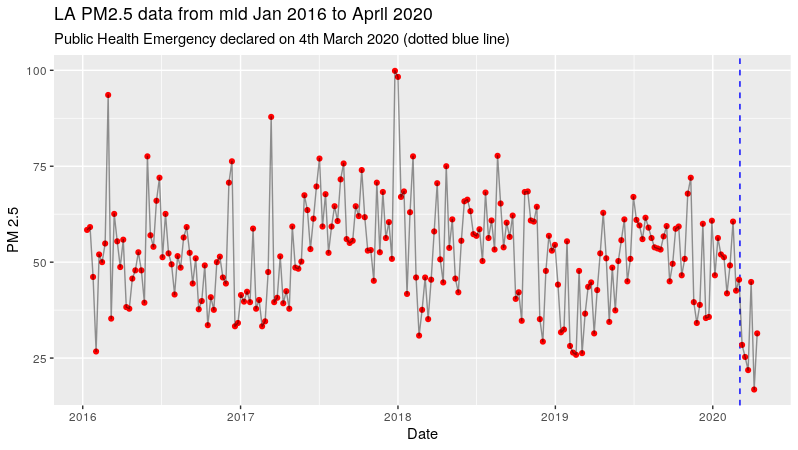 In this analysis, the impact of the declared public health emergency is perceived as an intervention. With the intention to slow the spread of the virus, the government mandated several measures such as social distancing, travel bans, closure of non-essential services. This drastically reduced economic activity, which can be seen as a form. Not only are the measures a sudden change, they are implemented for a prolonged period, which makes the quarantine initiative an interesting candidate for a causal analysis.

Using both CausalImpact and bsts packages, we can utilise the models of structural time series to create a counterfactual baseline as a projection of what would have happened if the intervention event did not occur.

We can first model the time series of the PM2.5 data using the structure time series. The model assumes the following state components:

As observed, this model is only a univariate series with no exogenous factors. To improve the modelling of the series, one can utilise exogenous factors with the “spike and slab” feature selection process that comes with the bsts package. However, in view that we are pursuing a causal analysis of an intervention variable that has wide spread effects, it is difficult to find unaffected exogenous variables that will help enhance the prediction of the counterfactual baseline. Thus, I will not pursue the additional modelling of exogenous variables.

In terms of modelling choices, I explored 4 models that were a combination of 2 by 2 factors:

Below is a short summary of the 4 models explored in this article:

Before we proceed, the criteria for model selection should be defined clearly. Using the 4 models, I will explore their cumulative 1 step forward prediction error for the time series between the start to the time of intervention. The reason why we stop at the point of the intervention is to ensure that we do not let the intervention results contaminate the pre-intervention period modelling. To do that, we will populate all data after the intervention event with NAs.

With the data set edited with NA for the post intervention period, let’s take a look at the different models. The modelling process can be broken down into the following: 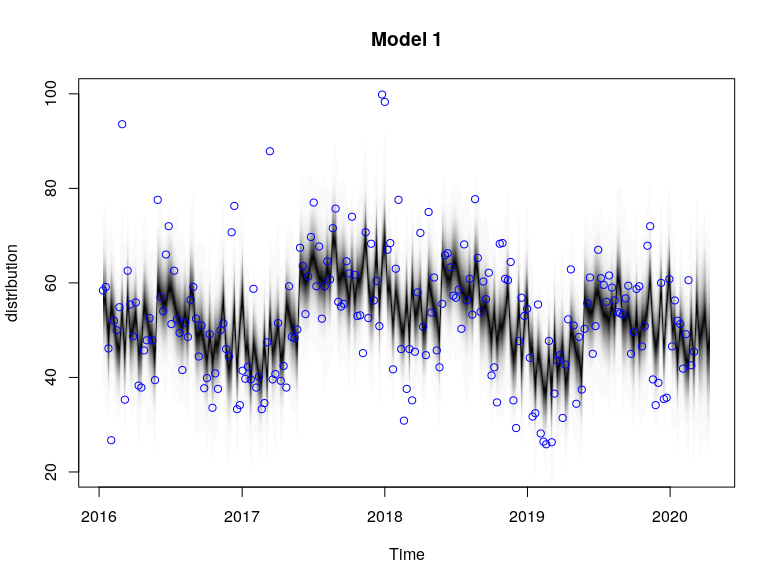 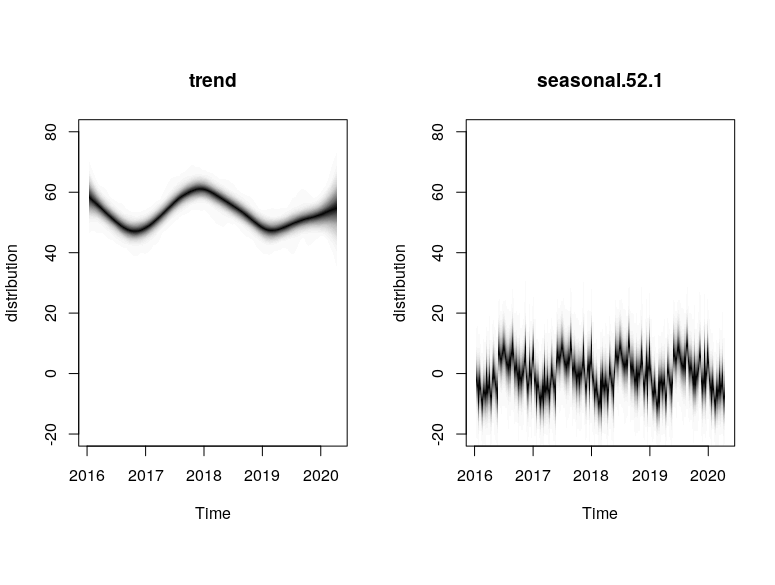 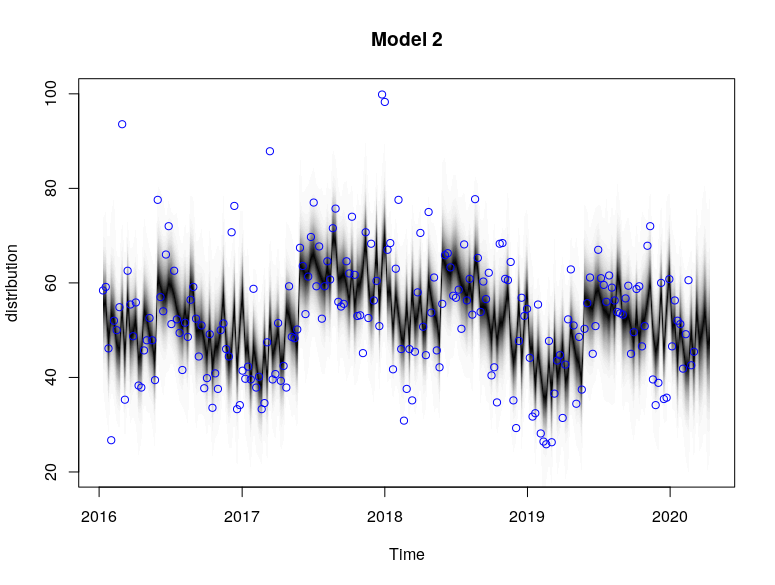 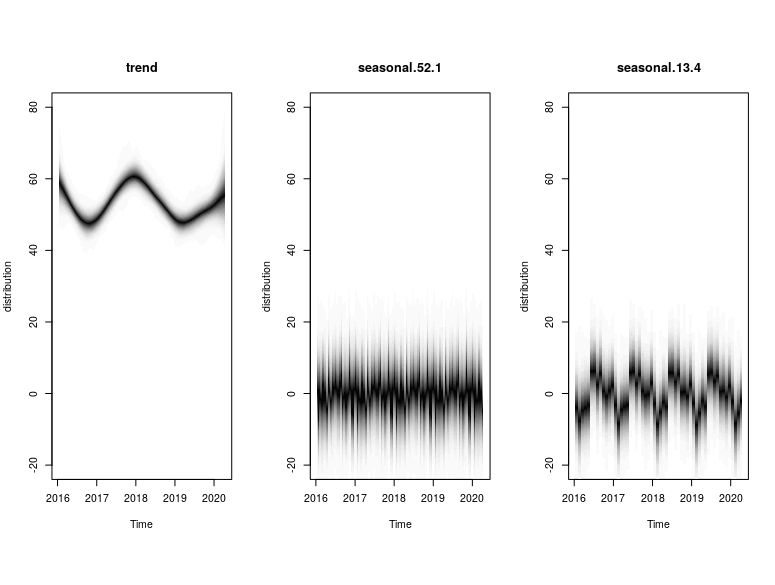 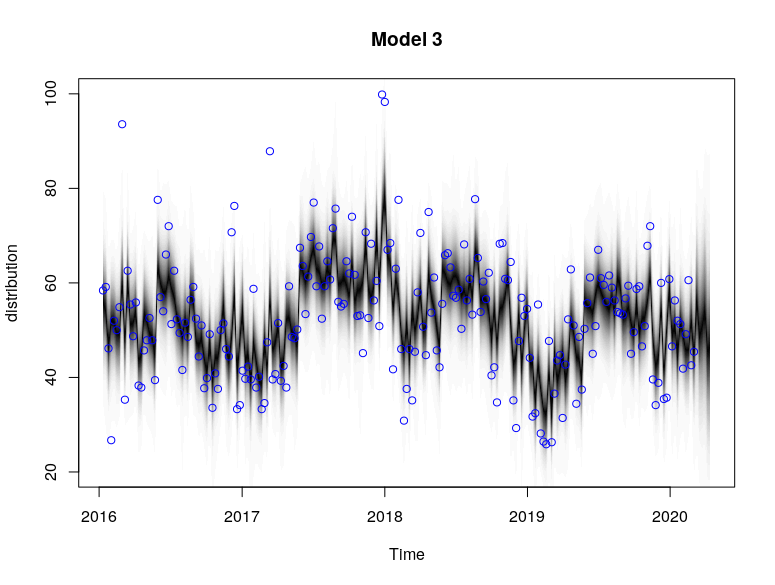 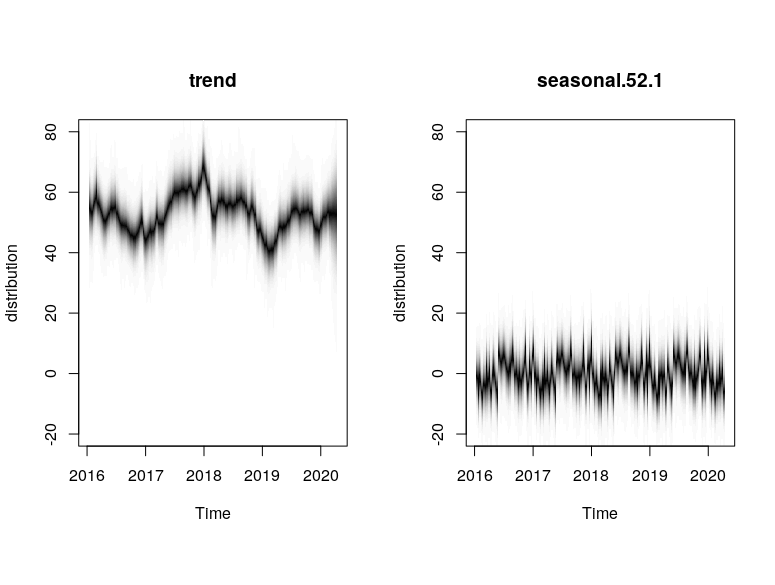 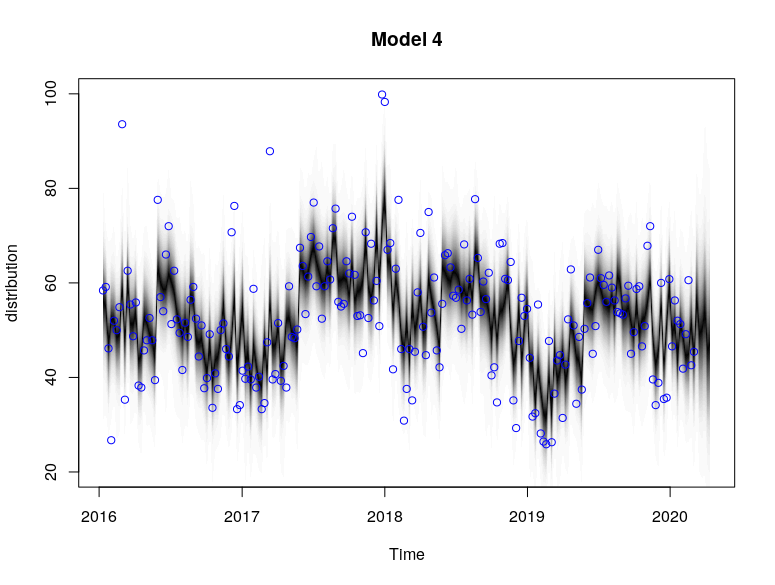 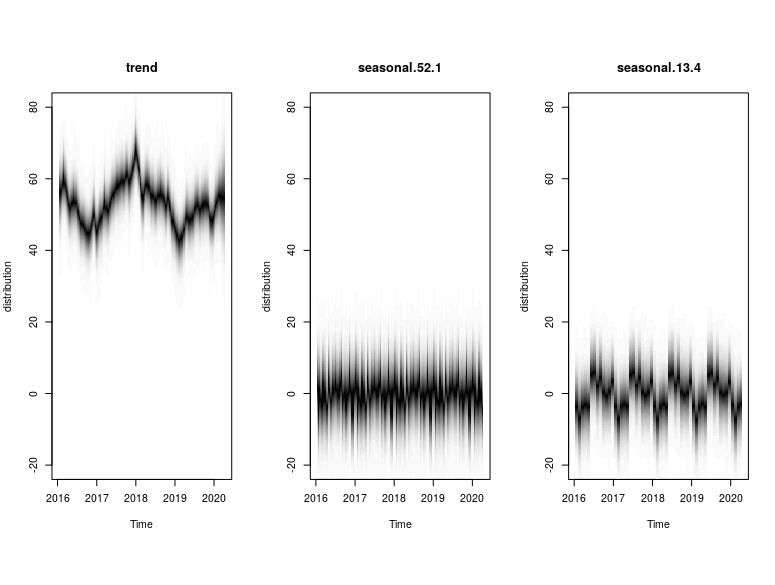 The plots provide the MCMC sampling of the structural time series given the observed data. The extent of shading reflects the posterior probability of the time series path under multiple simulations.

This is also manifested in the difference in the seasonal components between Model 1 and Model 3. Model 1 (local linear) attributes more of the high-deviation spikes to the 52 weekly seasonal component, but Model 3 (semi local linear) attributes those high-deviation spikes to be more of a trend stochasticity. As such, the seasonality pattern in Model 3 is more “compact” around its mean value compared to Model 1. 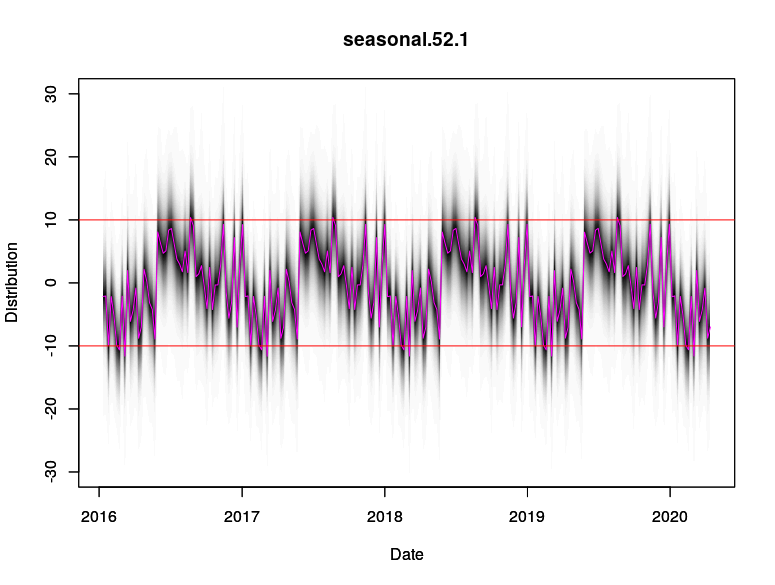 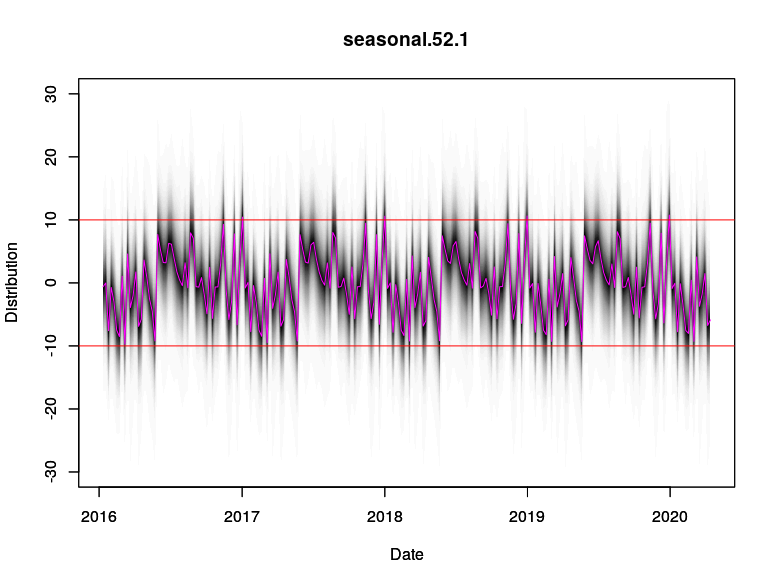 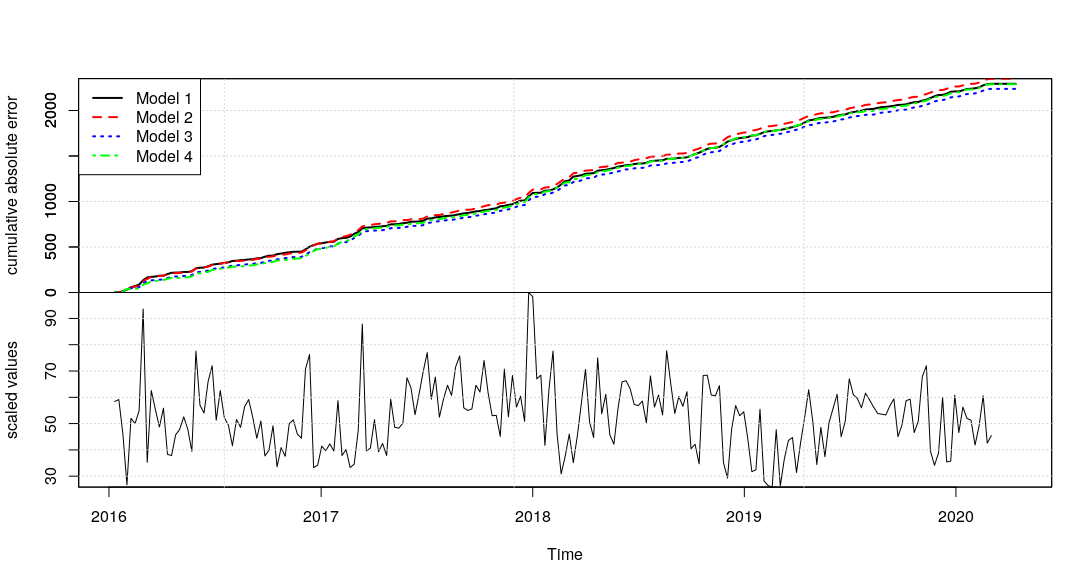 Based on that, we will use Model 3 to generate the counterfactual baseline for the Causal Analysis in the next section. At the same time, it is worth mentioning that the extra “Quasi-Monthly” seasonality (present in Models 2 and 4) was not incrementally useful compared to the base 52-weekly seasonality (present in Models 1 and 3) which was sufficient.

The CausalImpact package allows us to use the custom BSTS model which we created, but we have to feed in the data response after the intervention period. An additional argument alpha can be specified to estimate the posterior intervals (which is 1 - alpha). 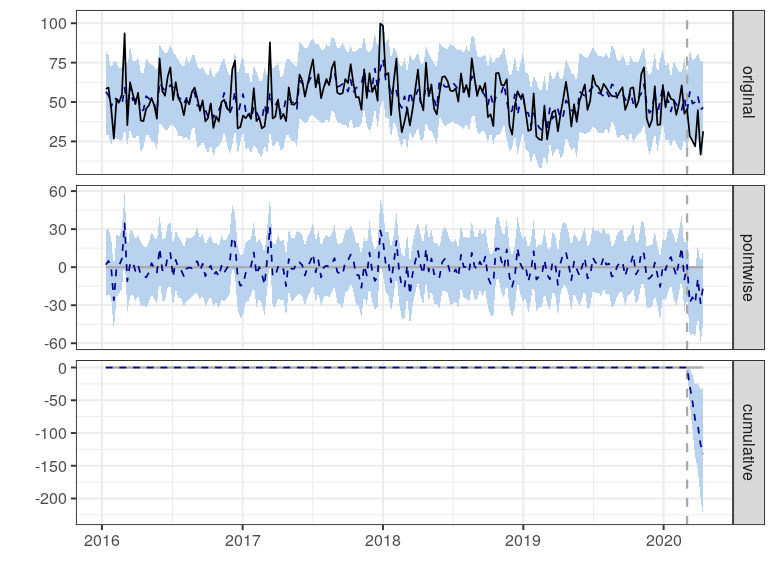 The plot has 3 sub-plots which can be characterised by:

Visually, we see that the pointwise estimate has shown a large degree of shift that seems significant. At the same time, the blue shaded regions help us visualise the uncertainty about our estimates. Given that the alpha was at 0.05, we are looking at the 95% posterior interval. In the immediate period after the intervention, we see that the PM2.5 air quality experienced a sharp reduction that is considered significantly different. After about a month, the PM2.5 show some partial extent of recovery, but remain largely deviated from its normal value.

We can also extract out the summary of the CausalImpact object.

The “Average” column represents the average across time during the post-intervention period, while the “Cumulative” column presents the total sum of the time points. In particular, looking at the Average Absolute effect, we see that it is estimated to be 22, with a 95% posterior interval between -38 to -5. Since the interval excludes 0, we can conclude that the intervention of the Public Health Emergency in Los Angeles had a causal impact on the PM2.5 air quality with certain assumptions.

For a further look at the report, we can run the following code which generates a template report that is populated with the analysis data.

One major limitation of this analysis is that there needs to be strong assumptions about the flow of causality. Based on my understanding of what happened with Covid-19, my postulation is that the intervention of public health emergency rendered a drastic reduction in human movement traffic and economic activity. This resulted in lesser energy consumed, which brought about a reduction of PM2.5 air particles in Los Angeles. Thus, this analysis is only true with the assumptions that there are no other confounding factors that may have affected PM2.5 data.

Another limitation is that the model can be further improved if we have exogenous data that could help improve the prediction of the counterfactual baseline. If we had such data, the uncertainty measured by the model would have been reduced greatly, which would enable us to detect any corresponding signals from the intervention more easily. As mentioned previously, the effects of the public health emergency and its measures are so prevalent that it is difficult to find an instrument variable that was not affected by the intervention.

Using that causal analysis framework and some postulation on the causal mechanism, I was able to show that the impact of a public health emergency due to Covid-19 in Los Angeles caused a reduction in PM 2.5 air, thereby improving the air quality (with some assumptions that there are no other confounders).

For a reference on the code, you can find it in this project Github. More specifically, the R code can be found in this R script. 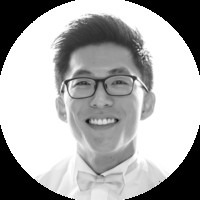 Hi there! My name is Kenneth Foo and I'm originally from Singapore. I’m graduated with a Master of Data Science degree from the University of British Columbia, and I'm currently working as a Senior Quantitative Engineer in OPALai (https://www.opalai.com/). With a passion for product data science and personalisation using machine learning, my key interests lies in topics such as bandit algorithms, online learning, Bayesian statistics, time series prediction, and causality frameworks.